Those calling themselves liberals, used to say: "the answer to intolerance is intolerance."

Today, those claiming to be liberals are, for the most part, not liberals at all, but crackpot PC totalitarians with no tolerance for anyone but their own intolerant kind. Toward such so-called liberals, the only reasonable attitude is intolerance. 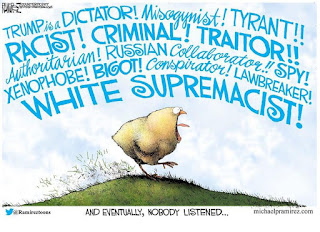 But it should be understood that, for the most part, today's PC totalitarian liberals are merely the dupes of the globalist elite, their role to serve as cannon fodder in the cultural war to destroy the Western nations and the culture of Christendom.

It is thus for the globalist elite and their front men and women, the likes of Zucks, Bryn and Page, Hillary Clinton, together with Prince Harry and the rest of the offset-buying, jet-set crowd, that the greatest intolerance is due.

For the gullible masses, in particular the brainwashed products of the Western "educational" system, intolerance must be tempered with compassion together with aid in overcoming the grotesque political programming that is now a central feature of state-directed education, especially at the post-secondary level.

Related:
Piers Morgan on the intolerance of today's so-called liberals: