A Letter from Moosejaw

From a  letter to the Editor of Moosejaw Today

... as the pandemic progressed, research showed that vaccinated people carry the same variable loads of COVID as unvaccinated people. This means that the vaccinated pose similar possibilities of transmitting the virus and can contribute to the virus’s potential spread as much as the unvaccinated. This new research makes the mandates absurd.
Mandatory vaccinations and their passports are dangerous and ugly precedents for our society to adopt. They segregate and they encourage discrimination..

Vivian Darroch-Lozowski, Ph.D
RELATED:
The Benefit Of SARS-CoV-2 Natural Immunity In The Armed Forces
Hey bud, the "the science" is supposed to baffle brains and keeps the people compliant. To bring into the public debate, as you have so unwisely done, what the white coats talk about among themselves, will only confuse people. As for doing what is best for the readiness of the military, what difference would it make? You think the US could actually win a war, or what?
With Vax Mandate, 91-Year-Old East German Sees Rise of Third Dictatorship in Lifetime
The US Federal Drug Agency to release Pfizer vaccine data in the Year 2077
Nothing to hide?
CJ Hopkins: Pathologized Totalitarianism 101
Thousands of New Yorkers Join WORLDWIDE RESISTANCE Against Covid Tyranny
WAYNE ROOT: The Great Vaccine Mandate Scam
Poll Finds That 58% of the British Public Back Vaccine Passports
Is BoJo the Clown going to follow Trend-Watch Trudeau and decide public health policy in accordance with public opinion? That is, after the media have done their worst to bullshit the public into believing the unvaxxed are a threat to the vaxxed, whereas the truth, as Yale Epidemiologist, Dr. Harvey Risch has pointed out, is "It's the unvaccinated who should fear the vaccinated, not the other way around."
How's that?
Just look at the data.
In England, the vaxxed have more Covid cases per 100,000 of population than the unvaxxed. In those over the age of 29, the ratio of vaxxed to unvaxxed cases is more than two to one. (In younger people the ratio is the other way around, but kids don't need to be vaxed as they are most unlikely to suffer serious illness from the virus, but will derive from it the benefit of life-long memory T- and B- cell immunity.)
Bill Gates Warns of Weaponized Smallpox Just After FDA Approves His New Pox Drug
Uh uh! Look out for what that vax profiteer is up to.
Covid lockdowns have triggered a "'tsunami' of type 2 diabetes"
Alex Berenson: Vaccinated English adults under 60 are dying at twice the rate of unvaccinated people the same age
Is this claim correct?
Probably.
We know the vax kills, whereas among young people, Covid rarely does.
The vax kills by inducing heart attacks, strokes and possibly other deadly conditions.
The lethal effects of the vax are concealed in most official data, which focus on the overall, or age-independent, death rates, these being determined mainly by the high mortality among the elderly. Any slight benefit of the vax among the elderly will thus be represented as a net overall benefit, even if there are severe adverse consequences for a significant minority of young people.
But with so much medical establishment authority and such vast expenditure of public funds invested in jabbing every person on the face of the planet, the insignificance of any overall benefit of the vax campaign, and the harm it is causing to the young cannot be officially acknowledged.
CDC and Big Pharma Data Confirm that More Children will Die from COVID Vaccine than from the COVID Virus
Sweden Has Had *Negative* Excess Mortality Since the Start of 2020
Yet Sweden Will Require Vax Passports By the Summer of 2022. What the frack?
Actually, it's simple. Sweden is pursuing the same agenda as everyone else: the end of freedom. In it's place Swedes will have a Chinese-style system of constant surveillance and control as the digital vax passport is expanded into a universal track and control mechanism: No vax? No travel for you. No entry to restaurants or bars. And that's just the start of it. Caught on camera jaywalking, littering, driving over the speed limit, then maybe a restriction on access to you bank account or use of a credit card. Heard on a concealed microphone calling Justin Trudeau a jerk, then no air travel for you. Perhaps no job either.
Is Smallpox the Next Agent of Social Change and Global Depopulation?
Creepy Bill Gates seems excited by the possibility
New South Wales prohibits unvaxxed persons from drinking while standing at weddings
Proving that reality is weirder than anything you could invent
Dr. Peter McCullough sues Elsevier Science for deleting article showing vax hazard to kids
Proof, if you need it, that "The Science" is just a branch of the lying media. That's the result of allowing corporate interests to take control of the scientific literature, which in times past was published almost exclusively by learned societies such as the American Physics Society, the American Chemical Society and hundreds of others. The societies and their publications were run by those who had devoted their lives to science, not a bunch of profit maximizing accountants and politically correct dorks.
Jordan Peterson: Canada's COVID Rules Based On Opinion Polls
Anyone who thinks the country should be governed according to what my neighbors think is an idiot.  But then we already knew that Trudeau's an idiot.
German Study: higher vax rate --> higher excess mortality
And the higher the mortality the more the public is supposed to demand everyone be jabbed. Brilliant
Ireland imposes lockdown and curfew for a population that is 93% vaccinated
Does anyone require additional proof that the vax has failed?
AUSTRIA GOVT DECLARES FORCED INJECTIONS! UNVACCINATED WILL BE JAILED!
The Government of Adolph's homeland acting true to type
Austrians Energetically Resist Covid Tyranny
Vive les Autrichiens, and the Dutch too! 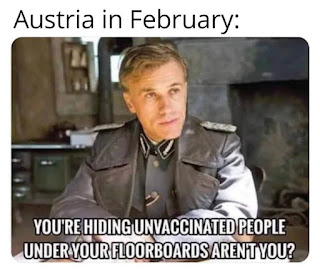 Funny thing in Africa: No Vax and Nobody Dying of Covid Neither
In a rational age, this would be cited as an example of no cause no effect
Aussies Rally Against Vax Tyranny
Australians recognize roo pooh for what it is even if it's the government's ordering them to swallow it
French Doctors Warn Against Vaccinating Healthy Children
The Spectator Just Caught Up with Moosejaw Today. LOL
More Proof that the Unvaxxed UnterMenschen, Beside Those with Real Immunity from Past Infection, Are No More Likely to Give You Virus Than the Virtuously Jabbed
Official Public Health England Data Says COVID Infection Rates Higher In Vaxx'd Than Unvaxx'd (as we pointed out here: Covid Vaccination to Promote the Spread) But the point is worth repeating over and over until even our incredibly stupid leaders (or are they just corrupt) are too embarrassed to go on lying about the necessity of punishing people with real immunity from past infection by locking them down forever or until they submit to the jab.
Scotland Urged to Abandon Vaccine Passports After Research Showing Vaccinated Just as Infectious as Unvaccinated
The Road To Fascism: Paved With Vaccine Mandates And Corporate Collusion
There’s NO case for “vaccinating” children…& the FDA meeting proves it
Pfizer “vaccine”: kill 200 to ‘save’ one?
British Medical Journal: Covid-19: Researcher blows the whistle on data integrity issues in Pfizer’s vaccine trial
Locking Down Unvaccinated, Is Not About Science, It`s About Punishing People
(Mad) Scientists developing vegetables with Covid spike protein
Worldwide Search Trend For "Died Suddenly" Spikes To Record Highs
Oklahoma National Guard rejects pentagon COVID-19 vaccine mandate
So who will enforce the mandate?
And Booster Doses, Mandatory or Otherwise, are Extremely Dangerous
Pfizer Hid from Public the Number of Deaths in COVID Clinical Trials — Actual Number Was 21 Which Was 6 More than was Reported and 4 More than Unvaccinated Group
Pfizer Vax Reported to Suppress Key Element of Immune System and Increase Incidence of Cancer
Flu rips Through Fully Covid Vaxed University of Michigan, bringing CDC to campus to investigate
Vaccine macht frei…
Connecticut nursing home COVID-19 outbreak results in 89 infected, 8 dead
How Covid despots humiliated America
Covid Comedy: An Interview With Germany's Dumbest Vax Promoter Posing as Immunologist
Posted by CS at 7:12 AM