CONFIRMED: Libya War is CIA Op 30 Years in the Making

An article by Tony Cartalucci, confirms the CIA/private think tank pedigree of the war on Libya.

In a separate piece, Tony Cartalucci exposes the current NATO operations inside Libya as a desperate psychological war with the corporate media explicitly deceiving the public with misleading headlines under which facts are buried by mountains of minutia, carefully worded propaganda, unverified innuendos, and outright lies. 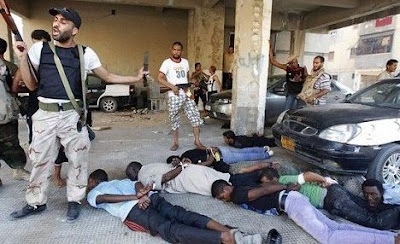 Photo: Images and reports are beginning to trickle in as NATO-backed genocide unfolds throughout Tripoli's streets, indicating the destruction of infrastructure and the specific targeting of black Africans written off by the corporate media as "suspected mercenaries." Benghazi rebels have been long reported to harbor extremist ideologies and an intense ethnic & racial hatred.

And here's Webster Tarpley on the Al Qaeda pirates taking over of the Mediterranean (U-Tube Vid).

And Chris Floyd on Dead Sirte: Another Murderous Twist in NATO's Coil of Lies
Posted by CS at 8:54 AM