This is a chart taken from Noah Carl's post on today's Daily Skeptic: 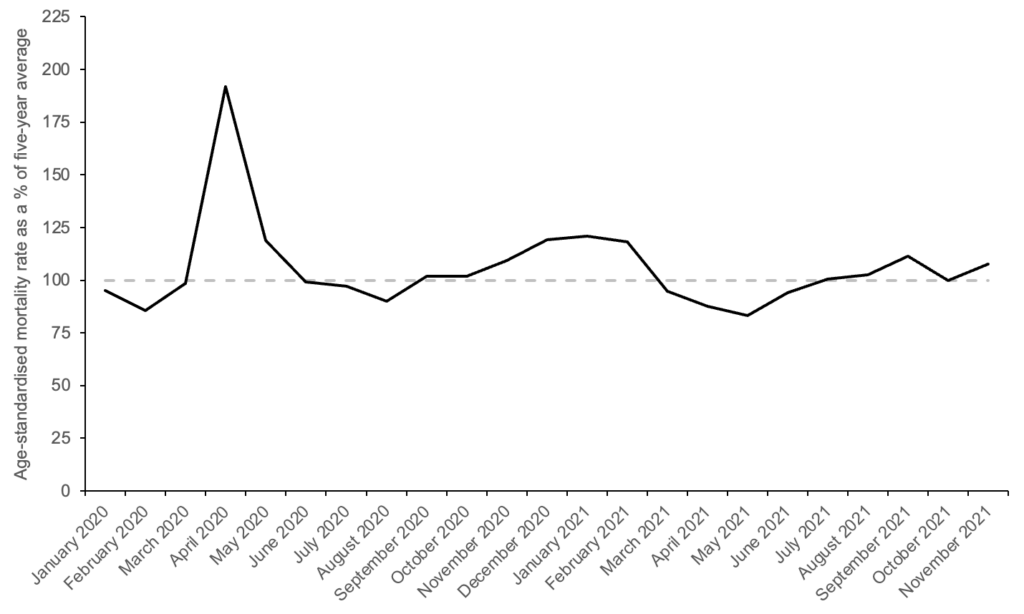 Does it look to you that there has been good reason to wreck the Christmas/New Year Holiday, destroy thousands of small businesses, disrupt the education of an entire generation, run gigantic public spending deficits, while terrorizing the population?

It will, of course, be argued by the Covid Nazis that without terrorizing the population, destroying the livelihood of millions, disrupting the education of a generation, and burdening the population with massive public debt, the excess death rate would have been much higher. Yet Sweden's experience refutes that claim. Moreover, the latest supposedly hyper-infectious Covid variant, Omicron, is virtually indistinguishable from the common cold, both in its effects and its genetic constitution. But panic, everyone, panic, panic, panic -- we gotta keep jabbing weird stuff into arms.

Ozzies goe full Nazi with concentration camps for unvaxxed
The Vaccine Is A Dud, But That Won't Stop Push For Digital IDs
Judge Rejects FDA's 75 Year Delay On Vax Data, Cuts To Just 8 Months
Government Confirms Covid ‘Disinformation Unit’ is in “Daily Contact With Online Providers”
Omicron Spreads Faster Than Delta Within Vaccinated Individuals: Danish Study That's because everything spreads faster among the vaccinated who falsely believe themselves to be immune from infection.
Kevin Ryan: Covid: A Collision of Historical and Scientific Illiteracy
They Said They Would Slow The Spread
3.3 MILLION people — one in 15 — had Covid on New Year's Eve in England
Dumb Democrats: Most Democrates Wrongly Believe That Vaccines Provide More Protection Than Natural Immunity
French President Views Unvaxxed As 'Non-Citizens', Vows To "Piss Them Off" Weeeirrd
Bhakdi/Burkhardt pathology results show 93% of people who died after being vaccinated were killed by the vaccine
World Council for Health Calls for an Immediate Stop to the Covid-19 Experimental ‘Vaccines’
DISCUSS: “Mass Psychosis” Trending on Twitter
Dr. Robert Malone interviewed by Joe Rogan
Is the vax  killing large numbers of young adults?
Robert Malone: MASS FORMATION PSYCHOSIS and the VAX
Governments Admit Using 'Mass Formation Psychosis' As Tool of Population Control

The London Telegraph reported the comments made by Members of the Scientific Pandemic Influenza Group on Behaviour (SPI-B), a sub-committee of the Scientific Advisory Group for Emergencies (Sage) the government’s chief scientific advisory group.

The report quotes a briefing from March 2020, as the first lockdown was decreed, that stated the government should drastically increase “the perceived level of personal threat” that the virus poses because “a substantial number of people still do not feel sufficiently personally threatened.”

.... another scientist on the subcommittee stated that they have been “stunned by the weaponisation of behavioural psychology” over the past year, and warned that “psychologists didn’t seem to notice when it stopped being altruistic and became manipulative.”

“They have too much power and it intoxicates them”, the scientist further warned.

... it was also revealed that the Canadian military launched a psychological operations program against their own citizens in the early days of the pandemic order to amplify government messaging and “head off civil disobedience.

There was a distinctive moment, at the start of the COVID-19 pandemic, that neatly encapsulated the mistakes and confusion of Britain’s early efforts to tackle the disease, says Mark Woolhouse. At a No 10 briefing in March 2020, cabinet minister Michael Gove warned the virus did not discriminate. “Everyone is at risk,” he announced.

And nothing could be further from the truth, argues Professor Woolhouse, an expert on infectious diseases at Edinburgh University. “I am afraid Gove’s statement was simply not true,” he says. “In fact, this is a very discriminatory virus. Some people are much more at risk from it than others. People over 75 are an astonishing 10,000 times more at risk than those who are under 15.”

Rob Slane: Reflections On Another Year Of Covidian Lies

Dr. Michael Yeadon, Dr. Sucharit Bhakdi: The Numbers Killed by these Vaccines is Much Worse than What We Thought

How the Covid vax drove the spread:

Since most members make a goodbye email before they leave, I figured I should as well, despite the “special” circumstances around my departure. Anyways, my time here in the RCMP is up. For now. The low T wannabe tyrants in Ottawa have decided that I can no longer serve as a police officer because I refuse to tell them if I have submitted to their “vaccine” edict.

I’ve served in the RCMP for 21 years and one of the first things I said to any person I ever arrested was “you don’t have to say anything to me.”

Unfortunately, our government has told me that I have to tell them what’s in my body, and if the right drug is not inside me, I have to get it as condition of my continuing employment, human rights be damned. Why did I put vaccine in quotations above you ask? More on that later. Buckle up and tighten the straps on your government mandated shame muzzle, this goodbye email will likely ruffle some feathers.

... Everyone had to get the vaccine regardless of whether they had natural immunity or not. Wait….. what? No one would ever suggest someone who had measles or polio should get vaccinated against those diseases. Why was natural immunity suddenly not talked about anymore? But if you knew where and how to look, it was talked about, and studied. The largest study was in Israel where the researchers concluded that natural immunity conveyed 27 times more protection than vaccination.

...Data from the UK is showing that vaccinated adults under 60 are dying at twice the rate of the unvaccinated. American VAERS data shows these Covid “vaccines” have caused more deaths than all other vaccines combined in the last 30 years. In Europe, FIFA data has revealed a 500% increase in cardiac events and sudden deaths in soccer players. Very recently, the American Heart Association released a study which demonstrated that Mrna “vaccines” dramatically increase markers related to heart conditions. A recent German study showed that the higher a jurisdictions’ vaccination rate, the higher it’s mortality rate. On November 11th of this year, a Doctor Nagase came forward to report a record 13 still born births, in a 24 hour period, at BC Children’s hospital. They average 1 per month. During a very recent Ontario provincial parliament debate, MP Rick Nicholls confronted the health minister about a sharp rise in still births from vaccinated pregnant women in Ontario. All he got for his efforts was deflection. Despite this new evidence beginning to come light, there has been absolute silence in the media. Instead, they now want to vaccinate our children. Children are at a near zero risk from Covid. Vaccinating children with these experimental drugs, with unknown long term side effects, which are starting to show increasing adverse effects, is absolutely criminal.

"Low T wannabe tyrants" LOL Great description for Trudeau and the myriad other Canadian Covid Nazi's.
World Council for Health Calls for an Immediate Stop to the COVID-19 Experimental “Vaccines”

The Vaccine is More Dangerous than COVID-19: Dr. Peter McCullough

And of course, despite Fauci's admission, he still recommends that parents vaccinate children, telling NewsNations's "Morning in America" that while it's true that "the numbers are very low," parents have to consider that "when it's your child, it's a very high number."

So - an appeal to emotion by 'the science' in order to get kids jabbed.

Bojo's Dopey Argument for Getting the Vax: 90% of Those in ICU are Double Vaxed

Yes, We Have No Covid in China, Just Lockdowns for Practice

Fauci Confirms that Long-Term Vax Safety and Effectiveness Is Unknown

Off Guardian: The Covid narrative is insane and illogical…and maybe that’s no accident

Take the situation in Canada right now, where the government has enforced a vaccine mandate on healthcare workers, meaning in British Columbia alone over 3000 hospital staff were on unpaid leave by November 1st.

How have local governments responded to staff shortages?

They are asking vaccinated employees who have tested positive for Covid to work.

So they are requesting people allegedly carrying a “deadly virus” work, rather than letting perfectly healthy unvaccinated people simply have their jobs back.

Or maybe, not insane but just dumb and intoxicated with the power to make people`s lives miserable, as technically qualified critics have suggested in the case of Dr. Bonnie Henry, or St. Bonnie as we prefer, British Columbia`s Provincial Health Officer: e.g.,

The Georgia Straight: Dr. Bonnie Henry receives scathing criticism from atmospheric chemistry experts for comment on aerosols
Posted by CS at 9:26 AM