How Justin Trudeau Could Save the World from Yet Another Futile, Failed, UN Climate Conference, But Won't

James Hansen, former Director of NASA's Goddard Institute for Space Science, is probably the World's best know climate scientist. It is noteworthy, therefore, when he states that America's position in advance of this week's UN-sponsored Paris conference to formulate mechanisms and agreements to curb human-caused climate warming is:


We are led by very, very stupid people.

Human activity affects climate in multiple ways, but chief among these are believed to be those activities that raise the atmospheric concentration of carbon dioxide; particularly the combustion of fossil fuels, but also the destruction of forests and the manufacture of cement. 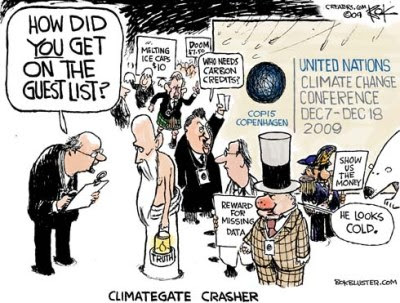 The purpose of the Paris conference to which twenty thousand have flown, emitting in the process thousands of tons of climate-changing carbon dioxide, is to complicate the issue beyond all hope of a solution and to instigate all kinds of multi-billion-dollar bureaucratic boondogles before returning home to prepare for the next conference (the current Paris meeting being the 21st), which activity justifies their sense of well-being and self-importance while assuring continuation of their comfy, jet-setting, bureaucratic lifestyles, incomes and pensions.

So what to do?

Simple: tax carbon emissions. This was obvious when I wrote  on the subject 18 years ago following Kyoto, among the first great failed UN Conferences on limiting human-caused climate change, and as I explained in a post here the other day.

Briefly, the thing is to tax carbon emissions while imposing a countervailing duty on goods from countries without a carbon tax. The countervail both protects home industry from unfair competition, while providing countries without a carbon tax the incentive to impose one so as to gather for themselves revenue otherwise collected by their trading partners. Moreover, by adjusting the rate, a carbon tax will achieve any desired reduction in carbon emissions at the lowest overall cost to the economy.

That's it, basically, although as Jim Hansen discusses in his paper linked above, there are some refinements to the idea that may be considered. But whatever the form in which it is applied, the carbon tax is an idea so simple that if any country were to announce a commitment to it the idea would be assured of the world's attention and the world's eventual agreement.

The failure of America, Europe and the Asian giants, China and India, to show leadership in the management of the global atmospheric commons, puts Canada, a country already committed in principle to the idea of a carbon tax, in the position to lead the world. Canada should take the opportunity that the otherwise futile Paris conference provides to announce a national carbon tax with a countervailing, across-the-board duty on imports from countries without a comparable tax, thereby establishing an effective mechanism of control over atmospheric carbon dioxide pollution, which, uncontrolled, will likely have catastrophic effects not only on climate, but on both global biodiversity and human cognitive capacity.

Justin Trudeau just announced on the CBC radio that he will be doing something or other in three months time after meeting with the Provincial Premiers. Well, OK, we'll give you three months, Justin, to sort something out with the Provinces. But don't miss this splendid opportunity (when both British Columbia and Alberta, Canada's biggest carbon emitters, already have a carbon tax) to establish a national carbon tax and end what has come to seem like an eternal debate about carbon dioxide and climate change.

National Post: Bloomberg: Trudeau’s national carbon tax a model that should be ‘widely copied’ around the world

Toronto Sun: Climate cult all about appearances
(And imposing a UN tax on the world)

CanSpeccy: MIT Meteorology Prof, Science Magazine and the Pope Concur: The Reality of Human Caused Climate Change Is an Article of Religious Faith

CanSpeccy: Al Gore’s assault on the integrity of science

Politico: Why the Paris climate deal is meaningless
Posted by CS at 10:08 AM