Americans Neither Believe Their Own Government Nor Support Its Violent Intentions

A new Reuters/Ipsos poll has finally found something that Americans like even less than Congress: the possibility of U.S. military intervention in Syria. Only 9 percent of respondents said that the Obama administration should intervene militarily in Syria; a RealClearPolitics poll average finds Congress has a 15 percent approval rating, making the country’s most hated political body almost twice as popular.

The Reuters/Ipsos poll was taken Aug.19-23, the very same week that horrific reports emerged strongly suggesting that Syrian leader Bashar al-Assad has used chemical weapons against his own people, potentially killing hundreds or even thousands of civilians. If there were ever a time that Americans would support some sort of action, you’d think this would be it. But this is the lowest support for intervention since the poll began tracking opinion on the issue. The survey also found that 60 percent oppose intervention outright, with the rest, perhaps sagely, saying that they don’t know.

Politico, August 26, 2013: Kerry Prepares the Way for US to Launch Shock and Awe Against Syria

Setting the stage for eventual military intervention, Kerry said in a statement from the State Department that what is happening on the ground in Syria “is real and it is compelling” and requires a response from the international community. Attacks on civilians by Bashar Assad’s regime are, he said, “a moral obscenity” that “should shock the conscience of the world.”

“Make no mistake: President Obama believes there must be accountability for those who would use the world’s most heinous weapons against the world’s most vulnerable people. Nothing today is more serious, and nothing is receiving more serious scrutiny,” Kerry later added.

Trouble for the Obama administration is that the US has cried wolf too often:

So now why would Americans believe their own lying government when it claims WMD use by Syria in the face of evidence that the incident, if any, was fabricated by agencies of the US Government?

It is now obvious to anyone familiar with international events of the last few years that the United States is the World's bastion of terror, deployed overseas against governments that refuse submission to US hegemomy, and at home to intimidate domestic critics and opponents.

The US is now the Evil Empire. And if the American empire fails, so what? The nation state is the only institution that resists the imperial will. Thus the American Empire, like all empires, seeks the genocide of all independent nations within its orbit. The US is the driver of globalization that undermines the prosperity of the Western nations, while destroying their culture and racial identity through mass immigration. The Western nations, including America herself, would be well rid of the US as the global hegemon, bully, liar and fount of terror both domestic and foreign.

Independent: Cameron calls Milliband a cast-iron shit for ratting on deal to give Parliamentary support for a criminal assault on Syria

A case of one foolish shit being taken in by another shit, for only a shit would have agreed to the deal in the first place.

Tony Cartalucci: CONFIRMED: US Claims Against Syria - There is no Evidence

"... the fact that Bush and Blair have never been brought to The Hague has something to do with our leaders dismissal of international law."


But there's still time to send Bush and Blair to the Hague. Let's get on with it. 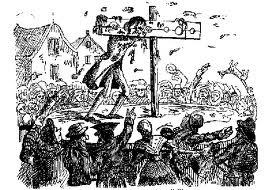 For once I find myself in complete agreement with Craig Murray who makes the logical, moral and political case for not intervening with cruise missiles in the Syrian civil war with absolute clarity and simplicity. But then the case is so clear that even the vast majority both in Britain and America see it clearly, indicating that the ability of the NeoCon bastards to lie the Western states into further open-ended wars in the ME and Central Asia is finally at an end as also the careers of the war criminal puppets such as Bliar, Camoron and O'Bomber.

Time to set up the pillory or get out the tar and feathers.


And since almost no one in either England or the US believed that the government of either country had a valid case, it is apparent either that the case was bullshit, or that Camoron and Obarmy are more stupid than the great majority of the Anglo/US population, or both. Either way, both leaders should be impeached for urging reckless, homicidal violence with cruise missiles.

Aangirfan: CAMORON HAS NO EVIDENCE!

AP: US Intelligence Sources Reject Administration Claims of Proof of Chemical Weapons Use Against Assad

Thus confirming that Obama, like Bush, wanted to go to war based on a load bollocks. That's a moral obscenity, to use bollocks-pushing John Kerry's phrase.

The Salt Lake Tribune: Iran: Strike on Syria to bring attack on Israel


The Prime Minister has now said he will wait for a report by United Nations weapons inspectors before seeking the approval of MPs for “direct British involvement” in the Syrian intervention.

Downing Street said the decision to wait for the UN was based on the “deep concerns” the country still harbours over the Iraq War.

The warmongers evidently beginning to see the danger of crying wolf once too often. Instead of public support for criminal aggression they could find themselves facing a lynch mob.

With reference to the former Archbishop's comments, it should be understand that a general war is something that US/Israel now urgently desires.

Great wars occur when a great power declines but resists giving place to others. The US is a fast declining power. Its industrial base has been massively hollowed out by globalization, its GDP and standard of living are falling, its educational standards increasingly a joke. Meantime Russia has rebuilt its military base, while China's economy on any rational basis of measurement has overtaken that of the US. With five times America's population, the largest industrial base in the world and a large and rapidly growing R&D sector, China will soon emerge as a global superpower. Hence the drive by US/Israel and their NATO puppets to conquer the ME while the possibility still remains, the hope being that by gaining absolute control over the World's largest energy reserves they can retain global dominance, and with it the means to impose the globalist agenda of the money power.

The globalist agenda means destruction of the nation states, including not only US/Israel's Nato puppets but America itself and the transfer of national authority to a collective of globalist institutions such as the UN, EU, NATO, NAFTA, etc., which will be subordinate to the money power, and thus give rise to a global plutocratic system or neo-feudalism, under which the vast mass of mankind will live or die at the whim of the very rich as a mind-controlled slave class.
CS

Telegraph: Syria: why would Assad invite a Western intervention by using WMDs in a war he was winning?

Mish: Reflections on "A Moral Obscenity": How Long Ago Was a War Against Syria Decided?


Those looking for "A Moral Obscenity" now have it.

I am willing to define the term as follows: A pre-ordained war, on inconclusive evidence, with only 9% support (24% even IF chemicals were used by Assad).

Robert Fisk: Obama Prepares for War in Alliance With Al-Quaeda


.... There will be some ironies, of course. While the Americans drone al-Qa’ida to death in Yemen and Pakistan – along, of course, with the usual flock of civilians – they will be giving them, with the help of Messrs Cameron, Hollande and the other Little General-politicians, material assistance in Syria by hitting al-Qa’ida’s enemies. Indeed, you can bet your bottom dollar that the one target the Americans will not strike in Syria will be al-Qa’ida or the Nusra front.

And our own Prime Minister will applaud whatever the Americans do, thus allying himself with al-Qa’ida, whose London bombings may have slipped his mind. Perhaps – since there is no institutional memory left among modern governments – Cameron has forgotten how similar are the sentiments being uttered by Obama and himself to those uttered by Bush and Blair a decade ago, the same bland assurances, uttered with such self-confidence but without quite enough evidence to make it stick.

In Iraq, we went to war on the basis of lies originally uttered by fakers and conmen. Now it’s war by YouTube.


[W]ho deputized the United States to walk the streets of the world pistol-whipping bad actors? Where does our imperial president come off drawing “red lines” and ordering nations not to cross them?

Neither the Security Council nor Congress nor NATO nor the Arab League has authorized war on Syria.

Who made Barack Obama the Wyatt Earp of the Global Village?

Moreover, where is the evidence that WMDs were used and that it had to be Assad who ordered them? Such an attack makes no sense.

Firing a few shells of gas at Syrian civilians was not going to advance Assad’s cause but, rather, was certain to bring universal condemnation on his regime and deal cards to the War Party, which wants a U.S. war on Syria as the back door to war on Iran.


Pepe Escobar: RUSSIA HAS PROOF THAT THE "REBELS" DID IT.


You know how hubris eventually encounters nemesis? Well it would stand to reason that a people given to believing that they can convince the punters of anything and get away with it would eventually tell a lie so poorly concocted and so badly delivered that they'd give themselves away.

Think about 911, or better still the WMD's-in-Iraq bullshit. At the time not so many realised it was fake and the audience for those who wrote about it was very small. Besides which, the timeframe between WMD lies and WMD truth was very long. Time is very useful for confusion and forgetting.

But things are really different now. ...

Washington's Blog: Evidence Indicates that Syrian Government Did Not Launch a Chemical Weapon Attack Against Its People

Global Research: Syria in the Context of the Zionist Plan for Greater Israel