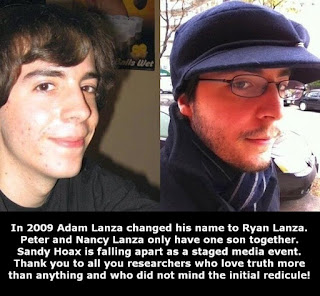 That the Lanza's had only one son has been asserted by a highly unreliable source. As evidence, a link is provided to this page, which however, provides evidence only of the fact that David and Nancy Lanza were divorced.

The images appear to be of the same person (see the small rectangular mole on the right cheek just in front of the ear, which is evident in both pictures (for a larger image follow the link above). But if they are pictures of the same person, possibly taken at an interval of several years, that does not preclude the possibility that that person had a brother!

But if the claim that Adam Lanza changed his name to Ryan Lanza is a hoax, what is the reason for such a shameless lie? To incite those pursuing the truth to propagate theories that will in due course be debunked? That would make sense. After 9/11, the perpetrators of any psyop would know that the evidence concerning the event will receive close critical scrutiny. Almost certainly, therefore, one objective of the operation would be to confuse, mislead and ultimately discredit skeptics.


And here's a broader and more convincing scenario from Undeleted Evidence, which includes a link to the Sandy Hook Rampage Movie.

And another interpretation here: Sandy Hook Theatre, by Melanie Lamport

Aangirfan has reproduced a certificate of the dissolution of marriage between Nancy, Jean and Peter, John Lanza, which is dated 12/9/2008, and which indicates that they had two sons, Ryan and Adam. So unless the certificate is a fake, we can dismiss the idea that Adam Lanza did not exist, an idea probably launched by someone intent on muddying the waters and discrediting "conspiracy nuts"gullible enough to believe gossip supported by nothing more than a photographic image of unknown provenance with a misleading caption.