The Liberal Way to Run the World: “Improve” or We’ll Kill You 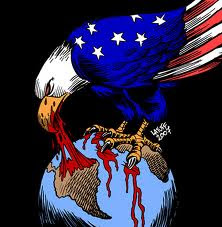 Global Research, September 05, 2012: What is the world’s most powerful and violent “ism”? The question will summon the usual demons, such as Islamism, now that communism has left the stage. The answer, wrote Harold Pinter, is only “superficially recorded, let alone documented, let alone acknowledged,” because only one ideology claims to be non-ideological, neither left nor right, the supreme way. This is liberalism.

In his 1859 essay, On Liberty, to which modern liberals pay homage, John Stuart Mills described the power of empire. “Despotism is a legitimate mode of government in dealing with barbarians,” he wrote, “provided the end be their  improvement, and the means justified by actually effecting that end.” The “barbarians” were large sections of humanity of whom “implicit obedience” was required. The French liberal Alexis de Tocqueville also believed in the bloody conquest of others as “a triumph of Christianity and civilization” that was “clearly pre-ordained in the sight of Providence.”

“It’s a nice and convenient myth that liberals are the peacemakers and conservatives the warmongers,” wrote the historian Hywel Williams in 2001, “but the imperialism of the liberal way may be more dangerous because of its open-ended nature — its conviction that it represents a superior form of life [while denying its] self-righteous fanaticism.” He had in mind a speech by Tony Blair in the aftermath of the 11 September 2001 attacks, in which Blair promised to “reorder this world around us” according to his “moral values.” At least a million dead later – in Iraq alone – this tribune of liberalism is today employed by the tyranny in Kazakhstan for a fee of $13 million.