American is in a depression, which means that demand for goods and services falls far short of potential supply. This in turns means mass unemployment and downward pressure on wages. 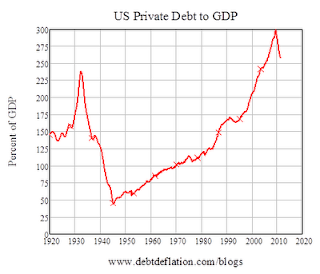 The depression would have begun early in the new century had the US Fed not enabled a frenzy of borrowing by dropping the Fed Funds rate from 6.5% in 2000 to a low of 1% three years later.

Then Greenspan's Fed drove a tank through the bubble it had created, imposing 17 consecutive increases in the Fed Funds rate, bringing it to a high of 5.25% in June 2006.

A property crash that destroyed the saving of many of America's middle class, and launched the Great American Depression of the 21st Century.

So how did the Fed react then?

Emergency low interests rates, obviously, to get the economy going again, which means a Fed Funds rate of essentially nothing (target 0-0.25%) and corporate borrowing for very close to nothing. Google, for example, just sold three-year notes with a coupon of 1.25%. (Quite a deal that, with real inflation running at maybe 10%.)

So if demand is depressed and the Fed has dropped interest rates to stimulate demand, how come there's inflation?

Inflation, technically, is a monetary phenomenon. It refers to an increase in money supply. The US money supply can be increased by Fed money printing.

This is sometimes known as quantitative easing, which sounds like the administration of a laxative.

Actually, what happens is this. The US Treasury prints up some bonds (well maybe the whole thing is digital now, but in the old days they printed bonds with fancy typography on nice paper with an elaborate water mark), which they hand over to the Fed. The Fed then writes the value of the bonds to the Government's account, using money the Fed does not have -- sometimes known as "ink money." The Government promptly spends the money, if it hasn't already done so, bombing brown people, feeling-up your crotch at the airport, etc.

This is not the most important source of new money, however. Banks and other financial institutions print their own money when they create loans. So when indebtedness expands, as during the Greenspan-induced bubble, money supply booms.

Now the reality of the depression is evident, money supply is contracting as borrowers, fearing for their financial future, desperately deleverage, either by paying down their debts or by walking away from them.

But if money supply is contracting, how come prices are increasing?

Because of the voracious demand of the very rapidly developing third world nations for raw materials, which is driving prices for oil, steel, copper, corn, rare earths and many other commodities sharply upward, and in turn, driving up prices of many other goods and services.

If money supply is contracting and rising prices are due to imported commodity price increases, why does the US Government not engage in greater deficit spending to stimulate the economy?

In times past, increased government spending could kick-start an economic recovery by increasing demand, which increased domestic production and hence incomes, which further increased demand, which created a sense of optimism that led to increased borrowing, which led to new investment and consumption, and so on until the next inflationary bust.

But in a globalized economy, tax cuts or other means to put money in consumers' pockets can raise spending while doing little to stimulate employment in a high-wage economy. Instead, the stimulus merely sucks in additional cheap products and services from the developing world, thereby increasing an already massive trade deficit.

True, if the US Fed were to flood the economy with newly printed money, recovery would result. Increased imports leading to a huge trade deficit would drive the dollar sharply lower, and this would stimulate exports, promote import-substitution, and raise the demand for labor.

So why won't the Fed do it?

A dollar devaluation sufficient to substantially revive America's manufacturing and tradeable services industries would most likely have to be in the 50 to 75% range.

Carried out over the course of a year or two, such a devaluation would generate a two- to threefold increase in prices of food, energy and imported manufactured goods, which would condemn millions of the elderly to an early death due to malnutrition, hypothermia or homelessness, as occurred in Russia following the collapse of the Soviet Union.

It would generate massive labor unrest, and it would turn the minds of many a middle-class saver to revolution.

And to the extent that economic stimulus restored the bargaining power of labor, wage hikes could stifle the recovery before it had begun. Only a persistent depression, it must have been decided, can grind down real wages to the point of international competitiveness.

Thus it is that Americans will likely face a combination of depression era unemployment, and continual inflation due to rising commodity prices and a gradual dollar devaluation achieved by intermittent rounds of money printing.

During these hard times, the corporate and financial sector will surely borrow overvalued US dollars at negative real interest rates and invest them in cheap currency areas such as China for repayment at 40 or 50 cents on the dollar when the dollar is fully devalued.

Se also:
Why Economics Is Bunk and What That Means for the Economy
USA versus China: Wage Convergence, Wealth Divergence and Global Hegemony
US Economy: Expecting the Unexpected
USA Boom or Bust: The Next Decade
Why China Booms While America Slumps
China's Economy Already Larger Than America's
Posted by CS at 2:14 PM