Tim Hunt, the Kind, Unworldly Nobel-Prize-Winner, Brought Down By a Report of Disputed Veracity By a Twittering, Anglophobic, Black-Privileged, Resumé-padding, Lecturer in Journalism and the Lies of Professor Michael Arthur, Provost of University College London, a Man Unable to Acknowledge an Error of Judgment, and Under the Sway of the Odious Morality of a Stuffed Corpse

I think the title says it all, but for those who want details and references, here they are:


he's a very kind and very eccentric, unworldly sort of man ... One thing you cannot say about Tim Hunt is that he is ``sexist.`` (Full Interview)

2. Brought Down By a Report of Disputed Veracity


The Times: Hunt’s ‘chauvinist’ speech praised as warm and funny
Sir Tim Hunt’s now infamous comments at a meal for women science journalists were not met by uncomfortable silence but were instead praised for being “warm and funny”, according to a leaked European Commission report.

An official who accompanied the Nobel prize-winning scientist on his visit to South Korea said that despite accounts at the time, which led to Sir Tim being forced to resign from several academic posts, his audience was not obviously offended by his comments about the ``trouble with girls`` in science.


The Twitter posting of Connie St. Louis that set off a firestorm over remarks made by Professor, Sir Tim Hunt, FRS, Nobel Laureate, while proposing a before-dinner toast at a conference for science journalists in Korea. 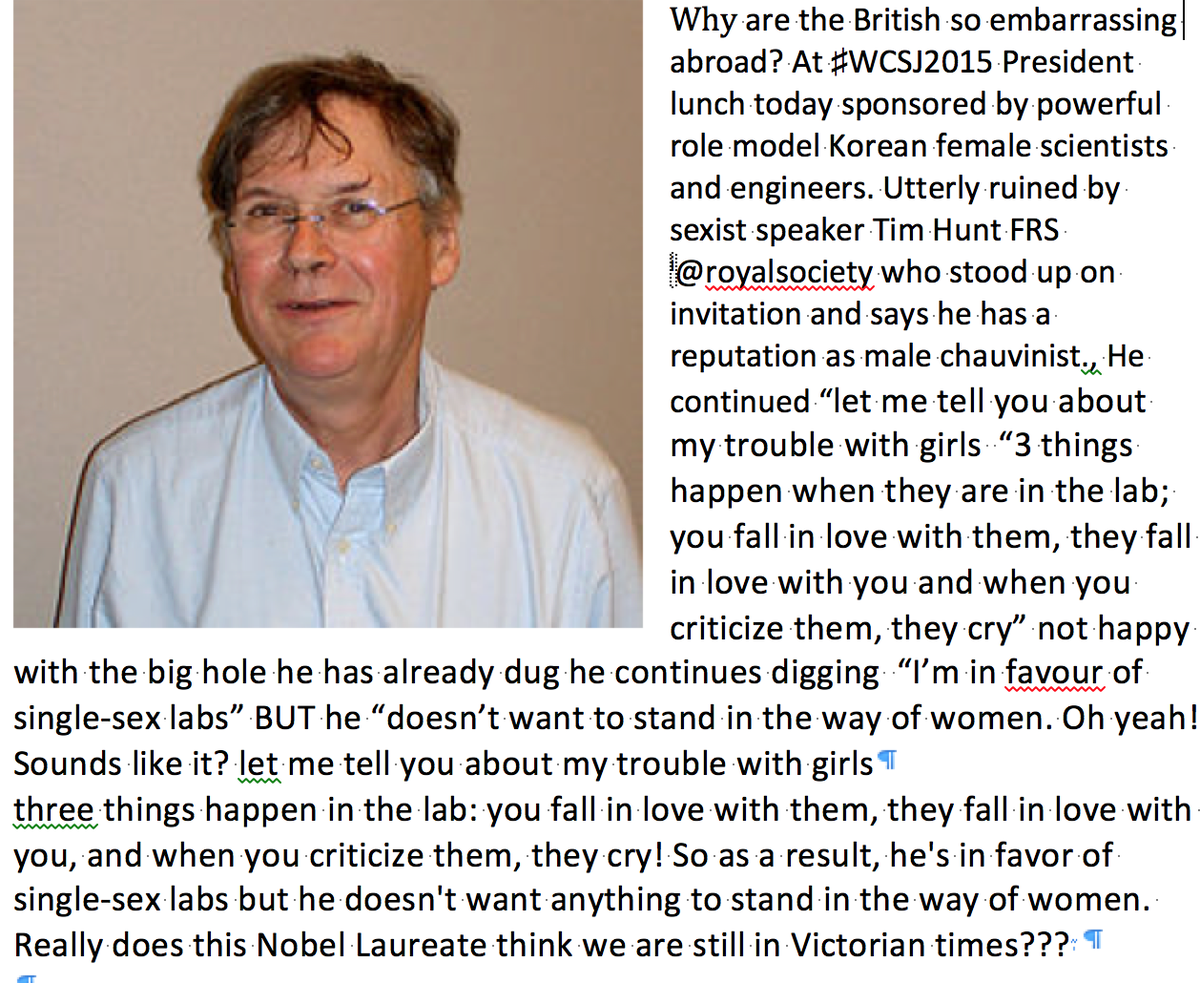 
"Why are the British so embarrassing abroad?"

You meant to stereotype just the white British abroad, eh Connie, not the members of the trendy settler community, surely.


Breitbart: Is the Media Silent on Tim Hunt Accuser Connie St. Louis's lies because of her "Black Provilege'?


Daily Mail: Lecturer who first accused 'sexist' Nobel Prize professor keeps her job despite the Mail revealing her dubious claims about her career (but has been told to 'update' her CV)


Professor Arthur argued that he accepted the resignation ‘in good faith on the basis that it was his personal choice as the honourable thing to do’.

Which is a lie if Tim Hunt's wife, Mary Collins, is to be believed. She has stated that Tim Hunt was induced to resign by a bullying phone call to her in which "she was told by a senior UCL figure – understood to be Dean of Life Sciences Geraint Rees – that he ‘should resign or be sacked’."

8. Professor Michael Arthur,  a Man Unable to Acknowledge an Error of Judgment

In an article for the university’s website on ‘women in science’, Professor Arthur said:

‘equality, diversity... were very important to the university.

The implication being that Tim Hunt is against equality and diversity in the university. This was the assumption that justified bullying Tim Hunt's wife to persuade Tim Hunt to resign his honorary, i.e., unpaid, position at University College London. But where is the evidence? Professor Arthur simply assumes it, and in doing so reiterates, by implication, what appears to be a libel. A libel, or a lie, which by implication, he then repeats:

‘It was for this very reason that Sir Tim’s remarks struck such a discordant note. Our ambition is to create a working environment in which women feel supported and valued at work.’

Then Professor Arthur made this remarkable admission:

9. Professor Arthur, A Man Under the Sway of the Odious Morality of a Stuffed Corpse

The stuffed corpse in question being that of Jeremy Bentham, which is kept at University College and is, so it has been claimed, wheeled out from time to time to sit at the head of the table at college council meetings.

The odious morality cited by Professor Arthur as justification for trashing Tim Hunt's reputation is Jeremy Bentham's "happiness principle" often referred to as utilitarianism, or as Professor Arthur describes it:


‘...the greatest good for the greatest number’ [which is] very important to the university.

In practical terms, this is the notion that if conducting cruel and lethal experiment on an innocent child would result in the cure of cancer for millions, then such experiments would be morally justified.

From this principle we can infer that, in Professor Arthur's mind, the crucifixion of Tim Hunt based on the misinterpretation of his remarks — if not their outright falsification — is fully justified if it benefits women in science.

It's the morality of the terrorist: shoot up a bunch of innocents on a Tunisian beach to advance the noble goals of the Islamic State, or blow up the Twin Towers as a pretext for the next war for oil, the plutocracy and the New World Order.

Now is the time for University College to send Bentham's corpse to the incinerator, and to find a new Provost who will speak for traditional European Christian values, not the New World Order narrative on equality and diversity and the trashing of white European males.

10. Then there's the dishonorable role of the Royal Society in the humiliation of Tim Hunt. But, as a snappy headline, my title was already too long. And anyhow I wrote about those bozos here.