MIT Meteorology Prof, Science Magazine and the Pope Concur: The Reality of Human Caused Climate Change Is an Article of Religious Faith 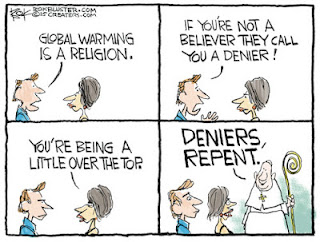 First there was an article by MIT meteorology professor emeritus, Richard Lindzen, asserting that  global warming alarmism is a religious cult.

Second, there was a long letter in Science magazine, the chief publication of the American Association for the Advancement of Science, asserting that the warnings of “science” about the risk of catastrophic global warming should be accepted by the public as a matter of faith.

Third, there was the Pope's encyclical "saying" so the CBC tells us, that "the crisis [of climate change] is man-made and must be fixed".

So there you have it: belief in human caused climate change is an article of faith endorsed by all and sundry, from MIT Prof., Richard Lindzen, to Science Mag. and the Pope.

To be fair, though, not all Catholics (or even all scientists, one hopes), believe that the climate change debate can be resolved other than on the basis of  the evidence. The point is nicely made in this post on the Catholic Answers blog:


Whether the Earth is getting warmer and the degree to which we may be responsible for that are matters of science, not faith. They stand or fall by the scientific evidence, which is why the pope appeals to scientific studies.

Furthermore, since the results of science are always provisional and open to revision—with the “scientific orthodoxy” of one generation frequently replaced in the next generation—people on both sides of the question should hold their views with proper reserve and openness to revising them.

This is thus a subject on which there can be a legitimate diversity of opinion among Catholics and among people in general.

Pretty weird, though, innit, having to go to a Catholic blog to get a reasonable statement of what constitutes a rational view of the climate science debate.


Catholics believe the Pope speaks infallibly when he makes a proclamation ex cathedra on matters of faith and morals. There is much within this encyclical which is not, strictly speaking, a matter of faith and morals. Indeed, the Pope takes the position of the UN in accepting as true conclusions about climate science which are still very much in dispute.

Which is to say, the Pope, on climate change, ain't infallible, he's just catapulting the propaganda. Likewise, Science magazine.
Posted by CS at 12:16 PM