USA Boom or Bust: The Next Decade


Will the U.S. economy ever recover?

"I'm a huge bull on America" declared Warren Buffett in September 2010, while ruling out the possibility of a double dip recession.

But 48% of Americans think America is already entering the next great depression.

And they, according to Bill Bonner, are optimists who have failed to notice that America has been in a recession for the last ten years, with no sign of a letup for many years to come.

Bonner appears to be correct in saying the US GDP has gained flip all in the last ten years.

And as millions of the unemployed run out of unemployment benefits, while losing hope of reemployment, and as millions more illegal immigrants flood in, the outlook for tens of millions of Americans becomes increasingly grim.

But on the bright side, corporate profits have never been higher. Since the low of 2002, IBM's share price is up 300%, Apple's is up 3000% (yes that's right, three thousand percent), and even the Dow and Buffett's stodgy Berkshire Hathaway are up 50%.

So what is going on, and why?

What these words mean for the American economy I have already discussed in Why China Booms While America Slumps. But the chief point is made in two sentences:

Here lies the answer to the dichotomy of view between Buffett and the common man.


As the wages of labour fall, the profits of stock rise, and they be together always of the same value...

Cheap labor in China and throughout the developing world means mega profits for American business and poverty for a tens of millions of Americans, and the hardship for millions of Americans is made worse by minimum wage laws that prevent those with skills of limited value from competing on price with Asian, African or Middle-Eastern labor.


How will this end?

(2) Wage equilibration in the tradable goods and services sectors of the economy between America and other Western economies, on the one hand, and the developing world on the other hand, which would mean a fully globalized economy with American living standards more or less matching those in Shanghai, Mumbai, Istambul and Cape Town.

The second alternative is clearly the objective of the ruling elite. So how will the transition be accomplished?

Wages, as Lord Maynard Keynes observed, are sticky on the downward side. Inflation is therefore almost certainly necessary to achieve the transition. This cuts real wages without lowering the dollar amounts paid in wages. It is achieved by printing dollars.

The printing press provides a technology that Ben Bernanke's Fed is proud to possess. We have seen QE 1, aka Money Printing 1, and QE 2. In due course expect to see QE 3, 4, 5 ...

As dollars spew out, the exchange value of the US dollar will fall. It has been falling for years, but now it should fall faster. The result should be a fall in the price of American exports in terms of other currencies and a rise in the cost of America imports in terms of dollars. The net effect should be a gradual restoration of American manufacturing with increasing exports and declining imports. 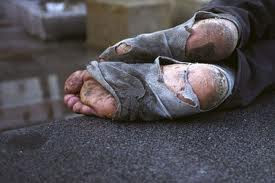 Trouble is, China, now the workshop of the World, is inflating as fast as Ben Bernanke can crank the press at the Federal Reserve. Net result? Chinese imports remain just as competitive in the American market as before.

What to do? Print even more US dollars.

This will be bad for China, since it will depreciate the hoard of dollars they have accumulated to prevent the Renmimbi from rising against the dollar. It'll serve them right.

But it will be good for many US equities, though not necessarily for those in the consumption sector, since American consumption is about to undergo a permanent decline.

And it will be very bad for those with cash.

Is gold an alternative?

But remember, gold is not money. No one is promising to pay the bearer any particular number of dollars for an ounce of gold.

POSTS FROM THE PAST
The New World Order (8)
About Intelligence (12)
Globalization (14)
A Scientific Perspective (40)
Christianity in the Age of Atheism (8)
The Death of the West (22)
The Novichok file (30)
Carbon, Climate, and Hot Air (18)
Other Stuff (24)
SCI/TECH
ScienceX
Live Science
Quanta Magazine